It was just about exactly a year ago that Caterpillar announced that they were going to be undergoing a major company wide restructuring to bring costs in line with demand and sales. The last quarter of 2015 saw incentives for some to take early retirement options, as well as some other job shifts locally and throughout the country at other Caterpillar facilities.

Whenever news related to the largest single employer in town comes down the wire and it’s related to jobs and job reallocation, it of course is met with trepidation and concern. We did see a lot of people take up the early retirement options. Many of those individuals headed south for the winter and we saw homes coming on the market that probably would not have normally been on the market at that time. Personally-the homes we had for sale that fell under this demographic have sold and we actually didn’t run into a “major surplus” that some people were predicting. Remember-this all came about in Sept 2015.

So what was the result? Did the market get flooded with new homes coming on the market? Did the economy crash?

So…jump ahead a year…here we are in Sept 2016. There has been more reorganization during that time, more relocations out of the area, but with the global reoganization we are also getting relocations into the area. In the last 3 weeks I’ve worked with Caterpillar employees coming in from Singapore, Denver, South Africa, Washington and Chicago.

How about now…did the sky fall since last Sept? Are we flooded with homes for sale?

New listings were down year to date through the end of July 2016 .4%. That’s a notable number, not because I’m trying to put you to sleep, which I probably am, but because despite the enormous changes to the local economy related to the areas largest employer, the number of new listings is only off by .4%. Pending sales were down 4.3%. It’s never positive indicator when pending sales are down, but based on the public perception, I think people would think that number would be higher How about closed sales? While they were down 16. 5% for the month of July 2016 compared to 2015, year to date they were off less than 1%. Not bad all things considering.

BIG CAVEAT…however…this is for the central Illinois market as a whole…all of the areas that the Peoria Area Association of Realtors covers. There are different price points, different communities, that might show a completely different picture. Here are a few links you may find useful if you are still awake…

Click here to get a comprehensive report on the whole central Illinois area.

This (above) is a pretty interesting report because it breaks down specific price ranges and how they are doing. The quick summary is the that lower price points are moving right along, while those on the higher end are seeing increased days on market and fewer sales.

Click here to see how different area communities compared to each other,

This report is also interesting. That’s assuming your cable is out and there’s nothing better to be doing. But it is interesting. Work with me. When people approach me and talk about what they heard about the “market” on the national news, Wall Street Journal, and even on a local state level, it usually doesn’t mean anything to me. It’s almost the same on a local level. For all of the data I’ve provided above, it’s for the central Illinois market as a whole. As you can see from the link above, all markets are different, even local markets. The Dunlap market compared to the Washington and Morton markets is different. The $500K and up price range in Dunlap is dramatically different from the $400K to $500K price range in Dunlap. The Chadwick Subdivision in Dunlap (school district) is dramatically different that the Sommer Place subdivision in Dunlap (school district), even though they are separated by a single street.

And THAT’s why I HATE Zillow. 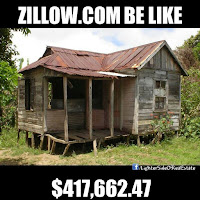 Where you waiting for this part?

Ok…I don’t HATE Zillow…I just hate (lower case letters) Zillow. Zillow has a thing called Zestimates. They supposedly tell you what a house is worth. Does it take into account the subdivision it’s in? Has Zillow ever been in the house to see the upgrades? What is a “Zillow” anyway? Primarily, Zillow is a play on the “zillions” of data points the company digests to come up with home values (Zestimates), but they also note that a home is more than just data; it’s also a place to lay one’s head, hence the word pillow. And yes I just plagiarized that definition from Google. And yes I just threw up a little bit. But I digress. Zillow looks at an average of homes around a particular home to come up with the values. It looks at tax assessed values (which are widely off base in a lot of cases), it looks at it’s own inaccurate data, court records, as well as other subdivisions nearby. So…using Dunlap as an example, it might look at Augusta or Attingham subdivisions, which average above the $700K range, and also take into account a nearby subdivision where homes are selling for $250K. I imagine Zillow is to Realtors, what Web MD is to doctors, except Web MD is probably more accurate than Zillow. Zillow won’t kill you with a wrong valuation. It will just cost you thousands and thousands of dollars if you price your house based on what Zillow says it’s worth…which I guess could kill you in the end.

How about Trulia? As long as we’re going off on tangents….you may be wondering about Trulia, another home search engine.  In fact, it is (or was) a baby name, albeit a rare one. It apparently means “truthful” or “trustworthy,” something the company founder wanted to exude, but I think they missed it. Zillow bought Trulia and so it’s equally as (un)reliable. 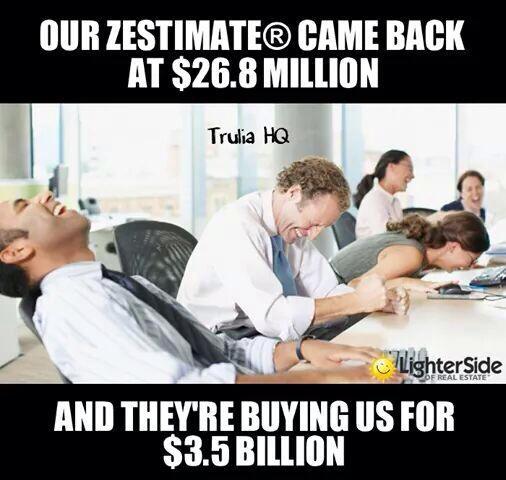 And what about Trump and Hillary, as long as we are talking about unreliable data points. Ok…never mind…I know when I’ve gone too far….